The University of Alberta will undergo complete administrative restructuring beginning in November to find efficiencies and economies of scale.

The Board of Governors — the highest decision-making body at the U of A — approved the administrative restructuring proposal on October 16. Changes within the proposal will be begin to be implemented in two weeks.

The approved structure is the suggested proposal from the Service Excellence Steering Committee (SESC), the university’s administrative restructuring working group. This proposal is what the committee sees as a “blended hybrid operational model,” landing in the middle of the centralized/decentralized spectrum.

The new administrative restructuring operating model, which illustrates how services and functions will be delivered, consists of 5 features.

There will be two service centres — one for staff, one for students — which will act as a centralized body that can address or triage general inquiries.

Centres of Excellence will consist of individuals that specialize in certain knowledge areas, dedicated to non-transactional, complex staff and student issues.

Service partners will provide support to faculties, such as strategic advice to deans, associate deans, and chairs.

The universal transaction processing hub will deal with high-volume transactional services such as payroll. The hub will be technology driven, aiming for efficiency and automation.

Faculties will retain certain roles and positions, though it is not yet clear which ones.

The university plans to begin a soft launch of this new structure by November.

Rob Munro, the executive lead of Service Excellence Transformation (SET) team, said there has been lots of engagement with university leadership about the administrative restructuring operating model, citing over 30 engagement sessions with leaders from faculties and central units.

Before the board voted, University of Alberta President Bill Flanagan brought forth a recommendation from General Faculties Council (GFC), the highest academic decision-making body at the university.

In this recommendation, GFC requested that SET presents their proposal for discussion and voting at GFC in a similar fashion as the academic restructuring committee.

The BoG ultimately chose not to take GFC’s suggestion into account — as allowed under the provincial post-secondary learning act — citing an urgency to approve the new administrative model.

“The university faces significant financial challenges that need to be addressed in a very short time frame,” Flanagan said. “To delay a decision on the operating model today would seriously delay the development of a plan to address the major job reductions that are necessary so that the university can balance its budget in this fiscal year.”

Kate Chisholm, board chair, said despite the board rejecting GFC’s recommendation, there will still be many opportunities for engagement.

“What we’re dealing with now is very big rocks in the jar,” Chisholm said. “Soon we’re gonna get into the pebbles, and then after that the sand. I think there will be lots of room for us to take further advice from GFC.” 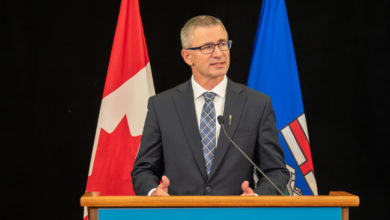