The Golden Bears soccer team took fourth place in the Canada West playoffs. In the semifinal, the Bears were defeated by the University of British Columbia (UBC) 0-3. The Bears went on to play Mount Royal University (MRU) in the bronze medal game where they lost 1-2.

Following their shut-out win against the University of Northern British Columbia, the Bears moved on to the final four playoffs in Vancouver. The Bears played the semifinal game on November 5 in Vancouver.

In the semifinal, UBC goalkeeper Peter Whyte shut out, for a Thunderbirds 0-3 win. Early in the first half, Thunderbird Victory Shumbusho had scored on a breakaway, but a foul was called and the goal was disallowed. UBC’s first goal was scored after a Bears turnover, as Shumbusho scored undefended from the outside lane. Shumbusho’s goal would be the only one of the first half, ending the first at 0-1.

The Thunderbirds second goal was scored by Nick Fussell, after Markus Kaiser passed to Mihai Hodut on the edge of Alberta’s box. Hodut passed across the box to Fussell who set the score at 0-2 for UBC.

Shumbusho scored again for UBC’s final goal of the game. The game ended at 0-3 which sent the Bears to fight for third place, as UBC faced the University of Calgary for the gold medal.

On November 6, the Bears and MRU Cougars matched up in the bronze medal game. The Bears looked to break their three game tie-streak against MRU, having tied the Cougars twice in the regular season and once in the pre-season.

The first goal of the game came when MRU’s David Schaefer carried the ball in the outside lane and passed to Dawid Dudek. Dudek then tucked the ball into the back corner of the net.

The Bears held the Cougars at a one-point lead for the remainder of the first half, before starting a foul-laden second half. Despite the frequent start-and-stop play, Alberta’s Garry Onyejelem caught a long downfield pass from Jake Bosch, making the shot on net. The goal set the score at 1-1 in the 75th minute.

MRU’s winning goal, in the 83rd minute of play, followed a corner kick by Niklas Liebich. Liechbich’s shot on net allowed Caden Rogozinski to tap the ball past Alberta goalie Liam Collens. The game ended at 1-2 for MRU, securing third place for the Cougars and fourth place for the Bears.

Amanda is the 2022-23 deputy sports reporter for The Gateway. She is in her final year of a Bachelor of Arts, majoring in English. When she has time, you can usually find her under a pile of blankets crying over fictional characters, baking, hiking, or spending time with her cat.

Pandas hockey go 0-2 against the University of British Columbia 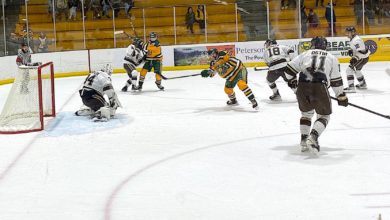