In the atrium of the Students’ Union building on Wednesday afternoon, students watched the federal candidates running in Old Strathcona participate in a lively debate. Students raised questions about diversifying Alberta’s economy, child-care, reconciliation, the implications of university cuts, racism and discrimination, to name a few. Overall, Heather McPherson, the New Democratic Party (NDP) candidate, did a good job defending her seat, despite some criticism from the other candidates.

Hibo Mohamed, the Liberal candidate, argued that the policies of the candidates on the left were unrealistic and left financial questions unanswered, as neither party had released their costed platforms at the time of the debate. Specifically, she questioned the promises from the Green Party and the NDP for tackling student loan debt.

“I have a lot of student loan debt as well…forgiving all student loans or forgiving $20,000 sounds really great,” she said. “But the reality is first of all, neither of these platforms are costed, so we don’t know how much that is going to cost,” she said. Mohamed also added that these systems could be abused by the wealthy who take out student loans despite not needing them.

The NDP costed platform was released over the weekend and received a passing score from former parliamentary budget officer, Kevin Page. The platform is the most ambitious of the three major parties but leaves some questions unanswered about how they will implement programs. While Mohamed’s criticisms of the NDP platform have merit, they don’t change the fact that their platform is more ambitious in trying to address students concerns. It seems that even in a Liberal government, the NDP are always going to be the stronger advocates for students.

Conservative candidate Tunde Obasan emphasized job creation and during the debate and when asked about child-care, argued that the conservative tax credit plan was the only feasible option. “The Liberals and the NDP have been talking about affordable child-care for over 20 years but we have not seen it happen. [Now] just a few weeks before the election it is coming up. These are promises that will never be delivered,” he said. “The Conservative plan is the one that will work for everyone.”

While the conservative tax credit would be the most easily implemented, it also won’t help people who are living month to month as was raised in the forum. People who can’t afford to shell out the money for child-care upfront wouldn’t be helped by this program. Alternatively, the Liberal and NDP $10 per day programs would make child-care costs go down dramatically across the country and have funds dedicated towards creating more child-care spaces to meet demand.

I was pleasantly surprised during the debate to see the most convincing criticism of McPherson come from Kelly Green, the Green Party candidate.

Green told students that he himself had voted for McPherson in the last federal election and had encouraged his friends to do the same. However, after two years he felt that the NDP had squandered many opportunities for change as they held the balance of power. “They blew it quite frankly,” he said.

“We had a minority parliament, and the NDP had the chance of a generation to bring changes to the people of Canada and squandered almost all of those chances. We don’t have Pharmacare. We don’t have dental care…we don’t have a strong plan on climate change…[and] CERB is drying out,” he said.

I think Kelly Green was strong in that he addressed the general cynicism that people have surrounding elections. He recognized that people have grown tired with the same old promises being broken. This accusation is often thrown at the Liberals and Conservatives, but he pointed out that the NDP can shoulder some of that blame as well.

That being said, McPherson still had the best performance today as she was not afraid to dive into specifics. She raised what she had accomplished over the last two years with her party, such as her advocacy on topics like student loan debt during the pandemic, coal exploration in the Rocky Mountains and funding for Campus Saint Jean (CSJ).

She also gave tangible ideas that she would advocate for going forward like tackling online hate on social media platforms, ending the blood ban, and ending student loan repayments during the pandemic to name a few. This level of detail and preparation was just not presented by the other candidates.

McPherson’s greater level of political experience and her advantage as the incumbent showed in today’s forum as she came across as prepared, enthusiastic and welcoming — inviting multiple members of the audience to speak to her after the forum so she could give more detailed answers to their questions. While all candidates did participate in a meet and greet after the forum, McPherson was the only one who went out of her way to invite people during the forum, which I thought was a smart move on her part as it made her seem very approachable.

The NDP probably could have pushed harder for certain issues these last two years and their platform may not yet have the fiscal details that it should. That being said, McPherson struck me as someone who is ready to eagerly jump back into parliament, to advocate for issues students care about.

Voting day is September 20, 2021 and you can find more information on how to vote here. 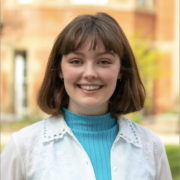