The University of Alberta Golden Bears soccer team opened up their season with a pair of ties this past weekend. The Bears hosted the University of Calgary Dinos and the Mount Royal University Cougars at Foote Field.

In the previous season, the team finished with a 4-1-5 regular season record and a 0-1 post-season record. The Bears entered the current season being ranked third in a coaches’ pre-season poll.

Canada West has returned to a standard schedule, which will allow the Bears to play a full 14 conference game season. It will be the fourth season the team is led by Martin Fenger-Anderson, head coach of the Bears soccer team.

On Saturday August 27, the Golden Bears soccer team opened up their season by playing against the Calgary Dinos. The Dinos entered the season being ranked sixth in the same coaches’ pre-season poll.

The Dinos were the first to score with a goal in the first half by Derek Brust, assisted by Jeff Spolnik.

In the second half, a red card was given to Bear Garry Onyejelem for a dangerous tackle. Despite being short one player, the Bears went on to score after a Dino turnover. Habib Assem was able to find the back of the net with an assist from Jake Bosch.

During a free kick for the Cougars, David Schaefer scored for Mount Royal early in the first half.

The Bears outshot the Cougars 14-12, but the Cougars had the higher shots on goal at seven to Alberta’s four.

In the second half, Assem scored his second goal of the season with an assist from David Chung. Chung attempted a close shot inside the box, but the shot was blocked and rebounded by Assem who was able to get it past the Cougars goalkeeper.

The pair of draws bring the Bear’s regular season record to 0-0-2. The Bears will be looking for their first win this coming weekend as they play Saskatchewan on Friday and Lethbridge on Sunday. 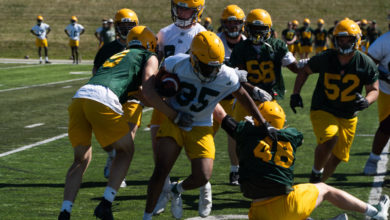 August 24, 2022
Subscribe to our Newsletter
Donate
Right now, The Gateway is free to read — but without your support, it won't always be this way. To help keep our reporting free and accessible for all, donate today to help fund student journalism on campus.
A little bit truly goes a long way.