Many would agree that Humanities Centre is the worst building on campus.

Littered with mouse traps, and dated, broken, and mixed matched chairs and desks, it is a building that has clearly been left behind. But the problems run much deeper than the surface level. The building is the epitome of “deferred maintenance” — the term the university uses to describe the ever-growing list of necessary repairs and renovations that have been put off.

The potential to remove or even demolish the building with no replacement is devastating to the arts community on campus. Despite being rough around the edges, Humanities Centre is worth saving.

A comment provided by the university said that the current deferred maintenance on the building is $7.7 million, which is expected to increase over the next five years to $16.2 million. The yearly operating costs of the building are $700,000.

The Humanities Centre also has asbestos — something common for buildings on campus that were constructed between the 1930s and 70s. The university comment also said that the latest asbestos work done on this building was during 2020. This included repairs to a wall in the atrium and window work. “The project was completed without any issues,” the statement said.

While the future of the building is to be determined, there are plans in place to move the groups currently housed there. Steve Patten, interim dean of the faculty of arts, said they are working on a plan to move these departments and groups to “an alternate space sometime within the next two to three years.” This planning includes consultation with leaders in the faculty of arts and facilities and operations to “ensure the people and units currently in the building are moved to the most appropriate of available spaces.”

However, this relocation may not be an improvement, as these departments will lose the dedicated space they have been housed in for almost 50 years.

For myself and many others, our first university class took place in Humanities Centre — English 101. The building is a source of many smaller classrooms that facilitate discussion and friendship-building for first-year language and English courses required for arts students. There is not a clear replacement on campus in terms of a building with many intimate 30-person classrooms in one place that is in the arts corridor.

Perhaps with the university’s plans to add 2,400 more students by 2025, these more intimate discussion-based classes are a thing of the past. Maybe departments like English and film studies will be crammed into other buildings, with larger class sizes and no permanent building to reside in.

The Humanities Centre also houses the arts advising offices. Going there confused and in need of advice was another hallmark experience of first year university.

In addition to these, the building also houses the Organization of Arts Students and Interdisciplinary Studies (OASIS) and the Parkland Institute. It serves as a hub of support and opportunities for arts students. Each of these will now be relocated, but likely into several buildings, leaving arts students without a place to call home.

It is also worth noting that the building is not very old. In 1973 after three years of construction, the building was over budget and behind schedule, but finally completed. It wasn’t easy either. In addition to delays, construction saw both a contractor’s strike and the death of a worker after falling three stories.

Not only is the building less than 50 years old, it is also a distinct architectural style that is part of Edmonton’s and the U of A’s history. It is an example of brutalism, with the structure of each story being cantilevered over the one beneath. Inside, the unique skylight with coloured ceiling tiles is also striking and features banners made by Canadian artist Takao Tanabe.

While this building may not be everyone’s cup of tea, it is a distinct and important historical architectural style.

It seems unlikely that everything the Humanities Centre currently holds will fit into an existing building. The result will be that humanities and arts services will be spread across campus, creating physical barriers that will leave the arts feeling more disconnected, less supported, and with a weaker sense of community.

The science and engineering buildings are all very physically close, with a central building connecting them. This creates a sense of place and community. The arts without the Humanities Centre however, will have no central building and no heart.

The Dentistry Pharmacy Building was another old building on campus that was in need of significant renovations. The deferred maintenance on the building was estimated to be $80 million in 2018 — far less than the $7.7 million estimated for Humanities Centre.

The Dentistry Pharmacy Building renewal project received $239 million in funding from the New Democratic Party government. The renewal project has allowed for the historic exterior of the building to be maintained while adding a modern interior and expansion. The project also received an additional $56 million from the United Conservative Party government in Budget 2022. The building has also been recently renamed the University Commons.

This renewal project is an example of how an old building can be saved on campus when it is valued and advocated for.

The plans for the future of the Humanities Centre feed into the perception that arts students are not valued and are being left behind in the future of this university. We may not be part of “high demand” programs in the eyes of the university and the provincial government, but our place on campus is important and should be valued and protected.

While the building may be in rough shape, the university can try and save it. They have neglected and ignored the state of it for too many years while restoring and renovating other buildings on campus. Arts students should be valued and feel like they have a home on this campus and both of these are threatened with the decision to remove the Humanities Centre.

Emily is the 2022-23 Editor-in-Chief, and previously served as the 2021-22 Opinion Editor at The Gateway. She is in her third year, studying political science and history. She is a lover of nature walks, politics, and times new roman font. She can often be found in value village, curating her signature look. 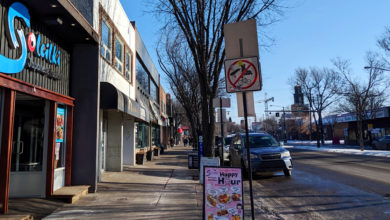 April 14, 2022
Subscribe to our Newsletter
Trending This Week
Back to top button
Close
Close