Let’s start the year off right with a topic on every Albertan’s mind: economic uncertainty.

Living in the city is not easy; at times, it can be expensive. Sometimes it feels like you’re not making enough, and according to the Edmonton Social Planning Council’s (ESPC) 2021 Living Wage Report, you’re not. This report highlights two facts; there is very little support for single Albertans and another increase to the minimum wage in Alberta is desperately needed.

The report looks at Edmonton’s livable wage, defining it as pay that provides “a higher standard of living than typical poverty measures, and accounts for the income an individual or family would need to participate in the community.”

According to this council, in order for a young family of four to have this financial security, they must make $18.10 an hour. But what shocked me the most, was how they found that for single adults in Edmonton (i.e. us, university students), a livable wage is $21.26 an hour. This number is staggering as the current minimum wage is nowhere near close. This points to a clear lack of support for us young adults and highlights that the lack of affordability is a serious issue which needs to be addressed.

Minimum wage in Alberta is currently $15 an hour — over a $6 difference. It is an unbelievable disparity that no one seems to be talking about but that everyone actively should be. The past two years where many young adults lost their jobs — losing the ability to even make minimum wage — taught us how truly expensive the cost of living can be. This astoundingly large disparity between the minimum wage and living wage is very worrying to say the least.

The report presented by the ESPC not only presented what the living wage of Edmonton is, but why it is so high as well. The council pointed to the fact that there are almost no government benefits offered for single adults and “no benefits dedicated to single adults living, in, or at risk of, poverty.”

Single adults truly only have access to the GST and Climate Action Incentive, that’s it. Certain tax credits that used to be available were slashed in 2019. There is little long-term government help available to us which keeps us struggling. However, this uphill battle is avoidable with an increase to minimum wage.

Don’t get me wrong, $15 an hour is not a horrible minimum wage; it has been less in the province before and I would argue most young adults were grateful for it. But $15 was great back then — not so much now. According to a CTV News article, the livable wage needed for a family of four in 2019 was only $16.56 an hour. In the past three years, that number has only risen but the minimum wage has not. We are in need of another increase to help get those struggling up to a living wage.

Talk of raising the minimum wage always brings out critics, like those who criticized the last minimum wage hike in 2015. But according to Ian Hussey, a research manager at the Parkland Institute, when the wage first increased, worries about things like job losses were unfounded.

Hussey points to how “in reality, minimum wage increases tend to result in a small percentage of teens losing their jobs, while estimated job losses for adults are effectively zero.”

The actual fears related to minimum wage increase are greatly exaggerated. Raising the minimum wage is very much worth it so that we can achieve a living wage that affords the dignity single adults like us deserve.

The lack of support for single adults and the lack of a living wage brings to light a serious issue in the province. But I don’t want to just fear-monger; quite the opposite actually. It’s time for students to start this conversation. The situation will only improve if young adults like us rally for this issue and push for change. It could be something as simple as pushing for more tax credits for students in this province.

This seemingly unreachable livable wage may have us single adults feeling left in the dark but the only way that will change is if we bring this issue to light. 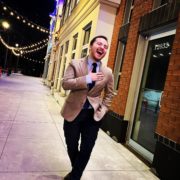