Through research in reinforcement learning, Martha White hopes to develop artificial intelligence (AI) to make it more applicable to the real world.

White, an associate computer science professor at the University of Alberta since 2017, has been named one of the top 10 AI researchers to watch in the world by the Institute of Electrical and Electronics Engineers. White researches reinforcement learning, an area of study in the field of AI.

“You can imagine in the most natural learning setting, you have a little robot, and it’s driving around and taking some action, like driving towards a goal,” White explained. “It gets positive rewards and it takes good actions, and it gets negative rewards and it gets bad actions. And we’d like to try to get our agents to do good things.”

According to White, certain widely-used reinforcement learning algorithms have well-known flaws, which in some cases lead to poor solutions where estimates become bigger and bigger. White’s research includes developing several new algorithms that address these issues.

White got involved with AI research during her undergraduate degree at the U of A.

“I started doing undergraduate research at the U of A with people in the computer science department,” White said. “It’s one of those kinds of problems that hooks you if you get to think a lot about how humans learn, and how to get computers to learn.”

“[AI research] also involves a lot of math, and my undergraduate was in math,” White said. “So it’s sort of bringing together this really big exciting problem with a lot of technical tools.”

When reflecting on being named one of the top 10 artificial intelligence researchers to watch in the world, White is glad her work is being recognized, but ultimately hopes this title brings more attention to U of A research.

“You never know for sure if anyone is paying attention to your work, and my research does matter to me,” White said. “I just hope it has an impact somewhere, so recognition of that impact is always a nice thing to see. The other reason I am happy about this award is that U of A is sometimes not as noticed as other places, so I feel like it also helps put U of A on the map.”

For students aspiring to get involved in AI research, White advised getting started early and keeping an open mind.

“Don’t narrow your focus too quickly, you might see one area and think, oh that looks really cool, I definitely have to work on that, but there’s just so many cool problems in machine learning and artificial intelligence,” White said.

“Go to the area [of study] with an open mind, look for the hard problems, and try to contribute to solving those problems.” 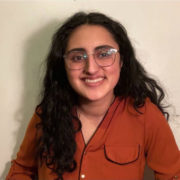