The Campus Food Bank (CFB) offers students a variety of services that address food insecurity in the university community. One of these services is the weekly grocery bus.

The grocery bus departs from the bus loop outside of HUB mall every Saturday at 10 a.m., and runs from September through April.

Students are able to reserve a seat on the grocery bus on the CFB website. The bus stops at Real Canadian Superstore, T&T Supermarket, and some specialty shops on 34 Ave. Two hours are provided for students to complete their shopping. The bus returns to campus at 1 p.m..

The Gateway did a ride-along on the grocery bus on December 10, and spoke to several students about their experiences.

Annie Liang found out about the grocery bus at this year’s clubs fair, and started using it in October. She usually stops at both Superstore and T&T. Although she does not use the bus every week, Liang finds the grocery bus more convenient than taking public transit. She also said that she thinks the bus provides access to more types of food than the stores around campus.

Ke Feng is a long-term user of the grocery bus, being a member of the program since 2018. Feng said that he has noticed more people using the bus recently than in previous years.

“I don’t use it every week, because when it’s too cold I stay home,” Feng said.

Students are also able to access other stores near the T&T Supermarket on Calgary Trail, including Walmart, H-Mart, and the Dollar Store. Feng said he thinks that this location offers grocery bus users a wider selection than shopping near campus.

As both a current volunteer, and grocery bus user since October 2021, Jun Jie Fong has seen both sides of the service. During the spring and summer semesters, Fong worked in the CFB office. This is his first term accompanying students on the grocery bus, which he says is a lot more stressful.

Recently, Fong has noticed an increase in students using the grocery bus, especially compared to when he was a student accessing it.

Like most students who use the grocery bus, Fong said he found it to be more convenient and accessible compared to many of the options around campus.

“I usually go to No Frills, but it’s a really long walk, and then you have to freeze outside,” he said.

Fong said that the stops, specifically Superstore, often have much better deals compared to options near campus.

The Gateway interviewed Erin O’Neil, the executive director of the CFB, about the history of the grocery bus.

The grocery bus first started in 2018, with the CFB self-funding five buses in both the fall and winter semester. After receiving the Heroes for Health grant in 2019, the CFB was able to fund 10 buses per semester. Because of the pandemic, O’Neil said, the grocery bus paused in spring 2020 and resumed in fall 2021.

O’Neil said she has seen a rise in demand for the grocery bus’ services since last year, when students returned to on-campus learning. Only three or four students took the bus in the fall of 2021 each Saturday. Now, O’Neil said students are using the bus more regularly. This fall, the bus has been used by as many as 40 students in one trip.

O’Neil speculates that inflation has been contributing to the rise.

“Because inflation is just on everyone’s minds, that has been the main contributor to increasing the number [of students] using the grocery bus,” O’Neil said.

In the fall, CFB expanded their free Breakfast Program to Campus Saint-Jean (CSJ), which O’Neil said “worked out beautifully.” The next step, she said, is to expand the grocery bus service to CSJ in January. The CFB also plans on adding Walmart to the weekly route.

O’Neil says that she wants to continue expanding the grocery bus, but running the service is expensive. In the new year, the CFB plans on asking the grocery stores along the route to help cover the cost of bus rentals.

“I’m hopeful that if we can get some cash injected into our budget for grocery bus programming, maybe we can do it more regularly,” she said.

The CFB has seen a rise in demand since the start of the semester. In November, the CFB had over 700 visits from 1,200 clients for the first time in its history, O’Neil said.

But, with inflation for food prices set to increase again in 2023, O’Neil worries that the CFB will outgrow its space again.

“We’ll have to see if we can get some more money. That’s always the answer.” 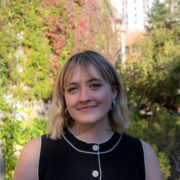