This is part five of a feature series about three Students’ Union experts’ analyses on who should and will win each race of the 2017 election, based on platforms, Q&As, and campaign performance. Opinions expressed do not reflect those of The Gateway.

The Vice-President (Student Life) race has been “playing it safe,” making it difficult to determine who the best candidate was. Simao attributed that to each race relying on their particular voting blocs.

Arts councillor Kyle Monda has been involved with HUB Mall and East Campus Village, but from the Residence Services side. As a resident assistant, Monda has worked towards unionizing student staff of the university. His platform includes promoting student groups in weekly events, creating an alternative to BearsDen (the campus student group database), and advocating for an all-gender washroom in every building on campus.

Ilya Ushakov has been a student leader in Lister. Like Monda, he hopes to create an alternative to BearsDen. His platform is more event-focused — if elected, he’d aim to create a large, campus-wide event and try to increase attendance for Athletics events.

Panelist Jordan Simao wanted to see Ushakov bringing up rent in the Peter Lougheed Hall and the Lister meal plan, as well as Alam bring up mice, bedbugs, and security issues in HUB Mall. The platforms were all playing it so safe that the election would come down to who has talked to all students.

“Residents’ rights are valid but we talk about them way too much in elections,” Simao said. “We’ve got three strong residence candidates this year. Why aren’t they using anything that they have in their wheelhouse?”

He saw the three candidates as three different approaches to what the VP (Student Life) should be.

“I see Kyle as somebody that is very levelheaded and will swallow something today to get some stuff done tomorrow,” he explained. “Rabib is a bit more inflammatory, and a little bit more militant and loud. Ilya is definitely a populist and his actions are going to be dictated by residence and what he’s hearing from residents.”

Panelist Justis Allard acknowledged that the VP (Student Life) role has largely evolved into an advocacy position — a few years ago, it was largely about party planning with a focus on events such as Break the Record. Now, with the Lister meal plan and the suspension of the Lister Hall Students’ Association, the VP (Student Life) is 90 per cent about dealing with the university’s residences.

Panelist Kieran Chrysler noted that in the VP (Operations and Finance) race, candidate Robyn Paches was largely focused on bringing students onto campus — events and programming have somewhat moved into that portfolio. She didn’t think Ushakov’s idea to build a clubs fair or Monda’s idea to promote a student group every week would be that helpful.

“Events are not really where the focus should be (in the VP (Student Life) portfolio,” she said. “Building a clubs fair, for example, is not going to bring in new people to campus that are disengaged … I’d like to see more of them actually engaging the broader student population,” she added.

From candidates, Allard wanted to see concrete steps and an understanding of the position. Alam’s goal of printing messages on coffee cups seemed trivial to the issue.

Allard contrasted this with Ushakov’s goal of lowering rent: while rent seemed like a bigger, distant goal, it was better for a candidate to take a “whole step on something that doesn’t affect (most students)” than to take a “half step on things that (affect most).”

Simao applauded Ushakov’s idea to focus on working with Athletics to bring more students events, as their programming tends to be effective. Golden Bears hockey games are some of the best events on campus, he said.

“I think that’s awesome,” Simao said. “He’s not really saying much of how he’s going to do it, but the fact that he’s acknowledging it is good.”

He then applauded Alam for being the only candidate to address sexual assault. But no one in the race really tried to promote their unique characteristics, which disappointed Allard.

“It’s frustrating that there isn’t that conversation about racial discrimination on campus, or sexual assault,” he said. “The best thing you can do as a candidate is to bring that up and to be debating it and discussing it. That’s how you come up with good policy solutions.”

Simao concluded that the three candidates have the best of intentions, but none of them have enough planning around implementation of said plans. 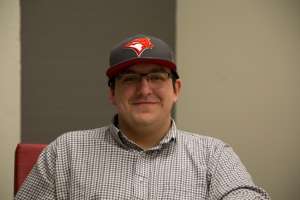